At its Govan shipyard on the banks of their River Clyde site, BAE systems is busy preparing for the construction of the ground-breaking Type 26 frigates for the Royal Navy.

The warships, also known as the City Class frigates has been classed as a ‘generational opportunity’ for Britain as the Type 26 frigates encompass one of the most advanced designs in the world. Steve Timms, BAE’s head of naval ships told the Express:

“The Type 26 is the first significant warship programme to depart from the tradition to design ships with drawings.”

Britain’s shipbuilding industry has never seen a global combat ship like it. It is believed that the Type 26 will in time replace the Type 23 frigate as the workhorse of the Fleet, undertaking the Royal Navy's three core roles - warfighting, maritime security and international engagement. 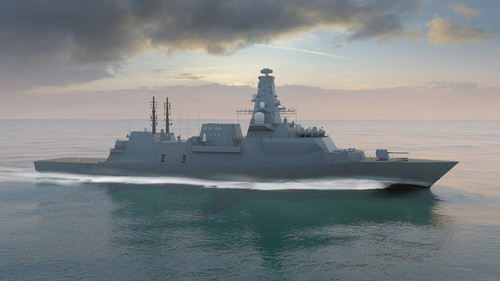 First and foremost, the 26s are being designed to protect the nation’s strategic deterrent and new Queen Elizabeth-class aircraft carriers from hostile submarines. The ships will be expected to deal missions across the full spectrum of Royal Navy operations – complex combat scenarios, counter-piracy, as well as humanitarian and disaster relief.

(All images sourced via BAE)

The design and construction of the 26s has brought with it an increase in job opportunities too. The Govan shipyard is the workplace of approximately 3,000 members of staff and provides invaluable opportunities to around 100 apprentices a year – many of whom stay on to continue their career with BAE.

A unique and futuristic feature of the Type 26 frigates is the cutting-edge digital modelling that has been used to allow the engineers working on the vessel to walk through a real-life digital version by wearing 3D glasses. This makes easier for engineers and designers to find problems and solve them before the ships go to production. It also lets future crews virtually hop on the frigate to get accustomed to it and suggest any improvements. And shipyard workers can plan how they will physically build the vessels, getting to know each detail and component by simply navigating the virtual ship.

Steve Timms explained the benefits of digital modelling to the Express:

“This system has played a big part in selling the design abroad. We’ve had visits from foreign navies and they can see the benefits of being able to change things quickly and to their own specifications.”

It is believed that Canada and BAE System have already agreed a local company across the pond will build 15 of these frigates under licence, while BAE will construct nine vessels in Australia.

Currently, Morson Forces has in excess of 2,500 ex-military contract and permanent staff from the Royal Navy, Army and RAF, working across a variety of client projects in the UK and overseas. Search our forces friendly jobs here.