Innovative technology and processes allowed a large bridge, part of the HS2 infrastructure, to be constructed in just two days - almost a full day ahead of schedule and avoiding weeks of delays.

Companies from the Midlands and across the North helped in the construction of the deck components, comprising some 1,130 tonnes of steel plate girders and 1,610 tonnes of precast and in-situ concrete.

Rather than using traditional methods of construction, which would have led to weeks of motorway closures, the bridge was moved into place on a 448-wheel, self-propelled modular transporter. The transporter moved the bridge 150 metres, after which it was fixed to the concrete deck and secured.

The process was a departure from the usual techniques used to construct bridges over motorways. With more traditional methods, the M42 would have faced weeks of closures and delays to commuters. Instead, the process was completed in just two days. 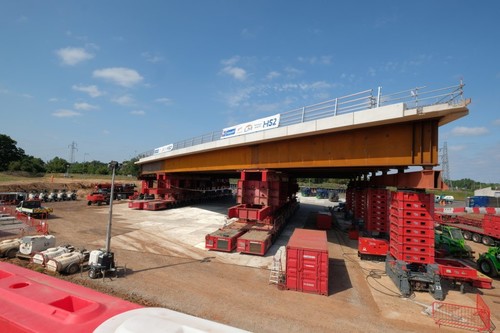 This bridge is the first of four bridges in the area, which is close to the brand-new Interchange station. The surrounding road network has been remodelled concurrently with the HS2 enabling works and will in turn improve traffic circulation in the area and connect them to the new Interchange Station. Additional work in preparation for the arrival of HS2 is scheduled to take place later this year.

Supporting over 20,000 jobs at peak construction, over 9,000 people across 2,000 UK businesses have been engaged already as part of the HS2 project.

The project is already having a positive economic affect on Birmingham and its surrounding towns, spearheading regeneration. Interchange station is at the heart of the UK Central Hub growth area which will create 70,000 new and safeguarded jobs, up to 5,000 new homes and 650,000 square metres of commercial space.

“This new road bridge is the first permanent structure to be installed along the route of Britain’s new railway. Today represents an important milestone for the project and the West Midlands region – which is already benefiting from thousands of jobs and renewed investment as a result of HS2. Constructing the bridge off site and using innovative engineering practices to install it over the motorway enabled us to carry out the work in just two days, keeping disruption to a minimum for road users”.

“Today’s work comes at a critical time for the West Midlands, as we look to bounce back economically from the coronavirus crisis. Major infrastructure projects like HS2 have a critical role to play as they help stimulate demand and create and secure local jobs for local people”.

As the UK's leading rail recruiter, we're uniquely placed to help you find your next role in rail. Search our latest jobs now.

Morson Training is a leading supplier of training to the UK rail network and offer an award-winning rail apprenticeship. Find out more about how you can join this growing industry and be part of HS2.