The squad recently returned from a pre-season training trip to Spain, which Watson saw as a key team-building experience:

“That’s the big thing, the trip to Spain was more about off-field than on-field. It was about getting the players to interact with each other. When you’re away from home, you get to know each other as a person, rather than just a rugby player. That was the big thing for us, that we gel as a side”

The motto of the club throughout last year’s success was ‘Together Stronger’ and Ormondroyd has immediately felt a sense of family at his new club:

“They couldn’t have been more welcoming, it’s been brilliant from the start. I think being so close knit goes a long way, at Featherstone Rovers last year we were a really tight knit group and we did some really good things. I think that played a massive part in what we did last year and hopefully this year at Salford we can do the same”

The Red Devils have had an impressive pre-season so far, with two convincing wins over Swinton and Leigh. Chris Atkins feels the side is continuously building in confidence heading into their final warm-up game against fellow Super League side, Warrington Wolves:

“I think the performances might not seem as important in pre-season, but we still go out there and win. It’s about building through these friendlies and getting prepared for that round one game against St Helens, it’s massively important to hit the ground running on that first one. Going into Leigh was the gradual progression of intensity and commitment that Ian wanted. I think we showed that against Leigh, the desire to set those standards early”

The 26-year-old also gave his thoughts heading into the season opener against Grand Final winners, St Helens, and the importance of building momentum throughout the upcoming year:

“The goal is to go one step further than last season. If we can start the season with a win or at least, a top performance, then we can build on to peak at the right time. That’s what happened last year, they went really well into the back of the season and won the games when it mattered. Obviously, they came up short in the final but St Helens are a quality team and I’m sure they’ll be fighting for silverware at the end of the season, as hopefully we will be”

Embracing new talent is integral to the growth of any professional sports club and Ian Watson described the biggest thing he assesses when recruiting signings:

“The big thing for us is the people, we’re a small squad. To achieve things and winning things we need to be close knit and work well together. We focus on the character of the person, whether they will actually fit. We do massive research on them as a person first, before them as a player and that’s been really successful. I think this group is the best we’ve had in terms of character and we’ll hopefully transfer that to the field” 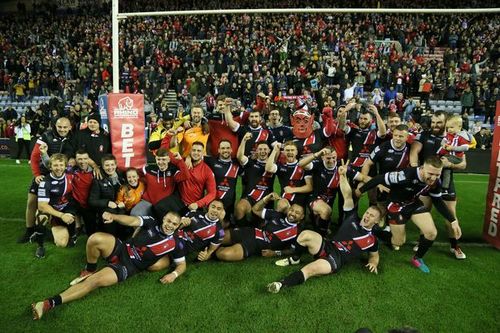 Watson’s history with the club runs deep as a Salfordian and a former player, but despite the magnitude of the heights of last season, the Red Devils coach never got carried away and made it clear that the focus was always on the task at hand:

“Once we got to the semi-final against Wigan and then the Grand Final, you could feel the expectation build in the local community. There were people contacting me from Australia that I knew from Eccles U11s team and they were coming across for the final! People were coming from all over the world to see Salford play in a final because they’d not been there for such a long time”

“You kind of miss little bits of it until you get right to the brink of it and then you see the effect it has on everyone else. Other than that, you’re quite oblivious because you’re in your own little bubble sometimes, that’s what we like to be in rather than focus on the outside noise”

We look forward to covering Salford’s Super League journey throughout the 2020 season, starting with their first home game against Toronto on February 8th Stay tuned!

A leading Aerospace and Defence client based in Yeovil Somerset are recruiting for several Technical Authors/ Intregrated support/ILS/Service Bulletin engineers. Backgrounds from AW101/159/LYNX would we welcomed, ideally with some level of experience of technical publications.The primary role of the Integrated Support Engineer Airworthiness/Bulletins is to support the Principal Engineer Airworthiness and Service Bulletins Co-ordinator in the effective delivery of airworthiness documentation across the business spectrum from our supply base to end customer to ensure corrective actions are controlled and instigated, resulting in formal company airworthiness documentation is issued to ensure LHD in service aircraft fleet is maintained in an airworthy manner .Ensure the work is performed in accordance with departmental procedures DPR.CSU.15.12 KEY JOB ACCOUNTABILITIES%ofTimeEmployees· You are responsible for ensuring that activities under your control are undertaken in accordance with the requirements set out in the AWL SHE Policy, Health & Safety Operating manual, Health, Safety & Environment Management System Manual (HSE MSM). These documents identify your key responsibilities under the Health and Safety at Work Act 1974, Environmental Protection Act and other relevant HS&E legislation.·Specific responsibilities for Employees are detailed within HSE MSM Section 8.7 - Employees Main Activities· Produce Technical Instructions as a consequence of airworthiness data from all areas of the business to manage the correct mitigating actions are controlled to ensure the customer base is informed in a timely manner of all airworthiness information and required corrective actions as appropriate.· Maintain and as required liaise with all stakeholders to successfully close the issuing of aircraft inspections or modification instructions to reduce the cost of ownership of the aircraft, and control the implementation of product enhancements.· Manage your individual activities, its dependencies to ensure completion of the related tasks against priorities from an airworthiness perspective and aircraft delivery, to ensure the LMW fleet is delivered and maintained in an airworthy manner.· Provide and maintain complete workload status reports to ensure performance metrics can be produced.· Support the business with the expert technical process knowledge for the delivery of the correct airworthiness technical information in a timely manner to limit the amount of business exposure. Thus reducing the overall operating costs of the business by ensuring a cost effective solution is promulgated to the customer base, whilst maintaining fleet availability.·Ensure the associated Technical Instructions are developed in accordance with all relevant departmental procedures and company operating system, and ensure any recommendations for continued improvement are highlighted to the management team.· You are responsible for taking reasonable care of your own health and safety and that of others who may be affected by your acts or omissions at work and to co-operate with managers, supervisors and others to enable the company to meet its statutory obligations for health, safety and environment. 10% 90% ESSENTIAL KNOWLEDGE, SKILLS & EXPERIENCEEducated to at least HNC level in a relevant aviation related subject. Alternatively, to have completed a recognized engineering apprenticeship followed by a period of employment in all aspects of aircraft maintenance and overhaul, sufficient to gain the necessary practical experience for the job roleAircraft engineering and/or aircraft Technical Publications experience.Knowledge of Air Publication specifications e.g. ASD Spec 1000D, MilSpec1388 LSAR, DADS, DAvP 70/77, ATA02/90, ATA100, etc. An understanding of Airworthiness and Flight Safety regulations and requirementsKnowledge of technical authoring and production tools e.g. Framemaker, Eagle Publishing System (EPS) and CAPS2000.Good understanding of LMW Helicopter productsExcellent understanding of engineering drawings and use Dassault Enovia, with an understanding of the configuration management system and process.Good inter-personal skills.Keyboard skills, a working knowledge of computers and computer system applications.Written communication skills, the ability to document results from the audits performed and documenting validation reports and plans.Highly self-motivated and able to work as part of an integrated team as well as independently

Our client BAE Systems Barrow is recruiting Project Support Office Leads to lead a team in achieving programme goals and performance targets. Candidates MUST be proficient userS of EVM tools and techniques. For the foreseeable future this will likely be remote working rather than on site at Barrow. The Project Support Office Lead will be accountable for interpretations of data and information, acting as an enabler in the decision making process.The role involves but is not limited to the following:Work with the Project Control's management team in defining Project Controls Processes/Organisation for the Programme/ Projects.Provide support into Control Account Managers with the most complex accounts to enable effective management of costs, schedule, risks and opportunities and resources across whole Projects.Provide analysis of Earned Value Management (EVM) Data and variance reporting to the CAM populationLead and manage the production of various Project/Programme reports, using a variety of Software/Reporting Techniques and accountable for robust metrics and management reports required for the CAM Review process and CSR Reviews. Provide support, expertise and advice on data analysis and forecasting to Senior Management. Provide expertise in project planning, monitoring and control tools, techniques and procedures to Programme teams and Cost Account Managers.Lead improvement initiatives within the organisation in particular assist in establishing a robust project control culture within the business. Lead on System/Process development and creation, distribution and analysis of ad hoc reports.Accountable for supporting the CAM's in defining the work content of the control account (Statement of work) to support resource estimating. Accountable for providing timely inputs to the Company BRP Process to ensure required resource is available to carry out the defined scope of work. Accountable for analysis and reporting on cost and schedule performance in line with monthly CAM reviews and support completion of arising actions. Ensure integrity of overall Project data.Ensure general governance for all Project Controls processes; including Work Packages [Open/Close/Data Validation etc] at appropriate - authorised level and; regular cost and schedule baseline maintenance and support through the Performance Measurement Baseline Change Request (PMBCR) process. Accountable for production of Programme Information, analysing, identifying and communicating areas for continuous improvement. Lead, develop and motivate any reporting and assigned staff through good communication and honest open management techniques in keeping with company values, policies and procedures and Take responsibility and accountability for the performance management of the team [including PDR's, ESM, performance reviews etc] in line with the company process. Work with Cost Engineering and Finance in the development of accurate estimates in support of bids, annual budgets or cost to completion and analyse "spend to date" data. To be able to access, have a clear understanding of and apply the Quality and HS&E Management System documentation e.g. Process Instructions, Workmanship Standards, Risk Assessments etc. applicable to particular work scope and to obey all HS&E rules.Key Attributes Foundation Degree / HNC / HND / Certificate in Project Management or equivalent level of qualification Highly skilled in the use of Microsoft packages LCM Awareness Proficient user of EVM Tools and TechniquesRecognising the RESTRICTED nature of the work, suitable candidates will be SC cleared or eligible for this level of clearance. SC must be in place before start date.Please do not apply if your experience does not match the job spec above but please visit our website to view other roles.Due to the volume of CVs received if you have not had a response within 48 hours please take it that your application will not be progressed.

Looking for 4 finishing operatives able to install: * plasterboard, * a wraptite membrane * and a sealant strip to the inside of a commercial building in SW London