Over the next six weeks, we’re going to be releasing excerpts from the book, charting the Morson story from its earliest days to the present day.
​ 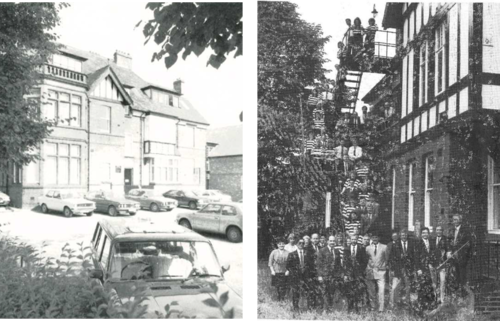 By 1979, J. Morson & Co had outgrown its offices in Bank Chambers and Gerry made a successful bid for new premises in Clarendon Road, Eccles. These new offices would become home to the company for the next 13 years.

“And that’s when we really did take off,” Gerry on the move to Clarendon Road.

It was at Clarendon Road that J. Morson & Co began taking on the shape that would later propel it to multinational success; yet the all-important family feel of the business remained very much alive. “It was a lovely atmosphere” recalls Pauline Hassall.

Derek Cowie, who retired as Director of Morson International Building Division in 2007, started his 25-year relationship with the business as a contractor. Having been hired as an architectural technician from 1976 to 1981, he decided he’d like to change his career and go into recruitment; and that’s when Gerry offered him a job. 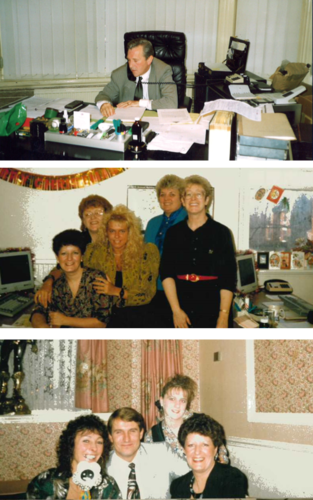 Back then, Derek’s appointment swelled the grand total of recruitment staff in the business to ten. This was at a time when success equalled 146 contractors hired out to clients and rapid year-on-growth was to follow. But that growth didn’t come easily. “There were six men, including Gerry,” Derek recalls, “and then there was Pauline, Avril, Lesley and another lady.” And although the team was small, it punched well above its weight. “We all wanted to grow the company,” says Derek. “It was in us, we weren’t just taking a salary. We really wanted the company to grow and to see the success.”

“Many agencies were growing at the time, but we did very well compared to our competitors,” says Derek. “I think it was Gerry’s drive really. We put more hours in than the competition. We often did 55 hours a week in the office, as well as taking files home with us every night. We even worked weekends too, phoning people from home.”

Derek remembers the sense of achievement when things went well, and also the days when they didn’t: “Every contract comes to an end. Leavers every week, starters every week. The more you grow the more you get of each. And as much as you keep in touch with your contractors while they’re hired out — because you don’t want them disappearing off to another agent behind your back — that does happen because the other agents are phoning them all the time.”

Despite the impact of two recessions, the 80s would be a tremendous decade of growth as Morson continued to build relationships with some of the UK’s largest employers of engineering talent.

5 Mistakes To Avoid When Planning An Internal Communications Strategy

Our successful client has an immediate requirement for a number of electrical wirers, capable of building and populating a range of control cabinets. Previous recent experience is essential, and must include: Reading and working from electrical schematics to produce control panels Soldering to a good commercial standard Wire preparation and crimping experience Assembly of electrical / electronic products Familiar with PCB's & electronic components Preference will be given to candidates with a proven work history and supporting references. Depending on work availability, these roles may end up being Temp to Perm. Hours are Monday to Thursday 7.30am to 4.15pm and Friday 7.30am to 12.15pm. Rates will be between £9hr and £11.19hr (depending on skills and experience). To apply, or for more detail, please contact Steve Johnstone at Morson International on (02392) 499988 or www.morson.com (agy)

Recruiting for an Environment Interfaces Manager to work on a contract basis for a leading client within the Transportation Industry. Looking for a strong candidate who has exceptional communicational skills and ability to interface at different levels. We are seeking a self-starter who has the capability to work remotely until returning to the office based in central Birmingham. Role is inside scope of IR35. Paying £300-£330 per day. JOB PURPOSE Manage the key internal and external environmental interface relationships and associated products to ensure consistency of approach and quality. To act as a facilitator between Environment Teams helping deliver the environmental assessment work (including associated assessments) with programme, organisational, sponsor and parliamentary requirements. ACCOUNTABILITIES Support the Central Environment Team's route‐wide environmental assessment requirements and deliverables by facilitating and supporting close working between Teams to ensure consistency of approach and quality. Support the development, management and monitoring of an integrated environmental programme that ensures timely and efficient delivery of environmental inputs and outputs across the different interface points. Lead the co‐ordination of responses to general internal and external enquiries (including FOI, EIR and PQ requests) on environmental (including EIA, TA and EqIA) matters to ensure timely, consistent, robust and assured responses. Manage and approach to route‐wide technical stakeholder engagement via various different forums to obtain information to inform the development of the route‐wide assessment and design and to ensure the stakeholder's environmental and sustainability requirements are understood and managed so as to minimise petition risk and to support the development of a world class railway. Manage and co‐ordinate route‐wide environmental instructions to Counsel and Parliamentary Agents to support the development of, and response to, key strategic issues and ensure a clear and accessible audit trail. Ensure full audit trail of key decisions and compliant data management to enable effective petition management, efficient handling of enquiries (including FOI and EIR) and to ensure that statutory requirements are met. Support route‐wide environmental input into reports and briefings to Ministers to enable robust decision making. KNOWLEDGE, SKILLS, EXPERIENCE Bachelor degree (or equivalent) in a relevant environmental/ built environmental discipline. Chartered membership (or working towards membership) of a relevant environmental/ built environmental organisation is desirable. Experience of working on environmental assessment (EIA) and design on large or complex infrastructure/ engineering projects. Experience of project management within a built environmental field. Knowledge of EU and UK environment legislation and current best practice guidance. Proven ability to manage individuals and to work across multidisciplinary teams. Strong numeracy, written and verbal communication skills and the aptitude to rationally explain, explore and discuss environmental issues to a range of stakeholders. Strong IT skills and proven working ability to use Office based software, including Word, Excel, Power Point, Outlook, coupled with an aptitude towards learning and utilising new software in the office environment (training is provided in the use of the internal document management systems). A good understanding of GIS, SharePoint and eB is also desirable. Experience of preparing/ reviewing material for legal counsel. Experience of development strategies and rolling them out across different teams and achieving buyin from other team members. Experience of working under extremely tight deadlines and in a constantly changing project environment.

The Imports and Exports Supervisor will be responsible for delivering Import and Export of equipment into and out of Qatar. Coordination and supervision of safe receipt, storage, pick, pack, dispatch and transportation activities in order to deliver customer requirements within timescales set. Also supervises and coordinates the planning of logistics activity and the resolution of queries/issues through interface with other teams/organisations. Ensure motivation and effective utilisation of workforce, adherence to SHE, Quality and other internal and external regulations. The external movement of assets to meet operational requirements on the MOB will fall within governance of this role. In addition, the Imports and Exports Supervisor will be responsible for all assets held in quarantine and Item Discrepancy Report (IDR) on base, ensuring safety compliance of non-conforming parts are segregated and managed to prevent non-approved items being allowed into the Supply Chain. Maintains a strong working relationship with Warehousing and Repairs staff to ensure accurate transfer of items inbound and outbound to prevent processing delays. Requires an excellent understanding of International Import and Export procedures and the required Customs and Trade relations paperwork, processes and principles through which the items will be processed to allow order will be satisfied. Must understand constraints and lead times associated with the work and the importance of prioritisation and customer service. Able to apply knowledge and skills to situations of high complexity, able to interpret data trends and variances and understand the impact of these on future asset supply. Requires excellent analysis and planning skills along with excellent relationship building and problem solving skills, able to use appropriate IT systems, requires good numeracy. Requires team leader knowledge team leadership, operational performance management and reporting, people development. This person would be seen, as a professional in the field of operational supply chain activities, be able to define the processes, propose improvements and manage those improvement into the day-to-day running of the operation. Must have a working knowledge of Export Control requirements and restrictions. Institute of Supply Chain Management Level 5, NVQ Level 3 / Level 5 Award or its equivalent is desirable but not essential.

The PHS&T Supervisor will be responsible in the operational short to medium term for the coordination and supervision of safe receipt, storage, pick, pack, dispatch and transportation activities in order to deliver customer requirements within timescales set. Also supervises and coordinates the planning of logistics activity and the resolution of queries/issues through interface with other teams/organisations. Ensure motivation and effective utilisation of workforce, adherence to SHE, Quality and other internal and external regulations. This will include managing, stock (including lifting and stocktaking), handling, distribution of materiel on base (including Classified, Secret, or National Sensitive Data (NSD) equipment to meet the operational requirements of both Forward and Depth environments. In Addition the PHS&T Supervisor will be responsible for all the on base transportation of goods to the end user using delivery vehicles and forklift trucks in the execution of these duties to meet agreed KPIs and availability output on a daily basis. Requires in depth knowledge of the workings of a warehouse / logistics operation and the importance of compliance with the MRP Part 145 regulations. Requires excellent planning and expediting knowledge and skills and can demonstrate good experience of using asset tracking / warehouse and planning systems. Knowledge of BAES / customer and supplier logistics and Release to Service (RTS) documentation. Requires excellent relationship building and problem solving skills. Requires team leader knowledge, team leadership, budget control, planning, performance management and reporting. Requires good IT literacy skills and in depth knowledge of asset tracking / ERP systems. Understands Export Control regulation and be able to apply knowledge and skills in the correct completion of documentation. Close attention to details are essential. Driving licence Forklift licence desirable but not essential Institute of Supply Chain Management Level 5 or its equivalent is desirable but not essential.