​This weekend saw Kieran Farrell host his first boxing show of the year with his second successilve show at the University of Bolton stadium following last September's stellar card.

This year's event seemed destined to be Kieran's most captivating show yet with his brother Nathan's professional debut being the most interesting aspect of the build-up.

Unfortunately, Nathan was forced to withdraw from the show due to his long-standing issues with a knee injury meaning that he could not receive medical clearance for the date. This was coupled with the fact that Danny Craven’s scheduled headlining title fight had also been pulled from the bill. This meant that those remaining on the bill had that extra desire to perform that much better for the live crowd - which is exactly the way Kieran likes it.

The opening fight of the night saw Ben Ridings face the far more experienced Zygimantas Butkevicius in a four-round contest. This was only Riding’s second professional fight, but he dealt with the sense of occasion with a calm and measured performance against a tricky opponent to pick up another decision win and gained much needed in ring experience in the process.

Next up was the Joe Gallagher-managed Adam Little who returned after 17 months out of action and showed no signs of ring rust against the tough, Nathan Hardy. Little displayed his deceptive power countless times throughout the fight with multiple moments seeing Nathan wobbled and retreating. Despite Hardy’s heart, his chin eventually gave way, with a vicious overhand right being the final blow before the referee had seen enough.

Lee Clayton bounced back from defeat to pick up his first win since last February as he outclassed Russ Midgely over four rounds much to delight of his promoter, Kieran. Debutant, Sam Larkin equally impressed with a one-sided decision win of his own, setting himself up for an exciting year in the sport. 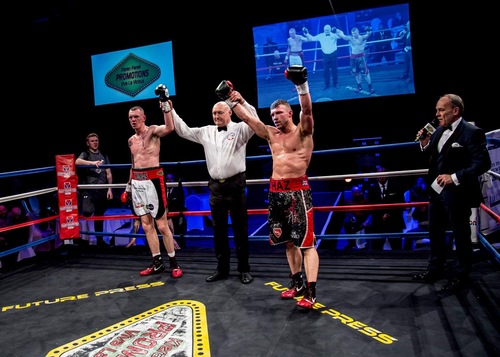 Ben Thomas will have to wait for his second professional win after battling to a draw in a gruelling bout with the difficult and determined, Harry Matthews. Despite the Kieran Farrell coached fighter not securing the win he would have wanted; his all action style was on display yet again in front of an electric hometown crowd. Khaleel Majid also had the Bolton crowd on their feet as he picked up his third win on points since turning professional last year.

Finally, the main event fittingly ended with the fight of the night as Reece MacMillan defeated the game, Lee Connelly in an absolute war of attrition over eight hard fought rounds. It was the first time 23-year-old MacMillan had venture into eight round territory and he more than showed he had the tenacity to keep up with the ferocious pace of a fighter like Connelly.

Despite some unfortunate late changes to the card, the ever reliable Kieran Farrell delivered another brilliant boxing showcase and highlighted yet again why he is setting the standard for small hall shows in the North West.

We at Morson are looking forward to what the rest of the year holds for Kieran Farrell Promotions.

Fantasy Premier League is back!

Assessing the existing commercial landscape and looking at the impact on programme delivery. Designing and implementing approaches which ensure effective delivery of the right outcome for the department. Leading on supplier integration with regards to relationship and cost impact upon the department. Clarifying the ability to terminate current contracts, working with programme finance leads to understand impact and realisation of any potential benefits. The ability to renegotiate existing contracts. Managing the impact of existing commercial financial models. Acting as primary point of contact between the incumbent supplier(s) and the department. Manage the sourcing activities for medium cost and business risk opportunities and work collaboratively with relevant customers and stakeholders to create and deliver commercial and contractual value

System Integration Project Manager (SiteTracker) Location: Bristol or Manchester Duration: 3 month rolling contract inside IR35 - Will take you to at least end of the financial year Our global Telecom client require an IT Project Manager who will be responsible for creating and leading an integrated team to deliver end-to-end projects ensuring they have a valid business benefit, deliver on time, within budget and to agreed quality criteria from conception through to market launch and transition into operations. Youll have the following skills & experience * Good knowledge of and experience with Sitetracker * Professional experience delivering medium to large projects (<£5m) within a Gated Project Governance process, focussed on: o Integration with supporting / adjoining systems, principally SiteTracker o Underpinning and interlocking wider business change and process re-engineering * Excellent track record in project delivery within a fast paced, Technology environment in the telecoms business using a range of internal and external suppliers to deliver. * Experience working with a range of stakeholders, up to 'Director of' levels If you are interested in hearing more about the position and the company then please apply directly or get in touch for more information -

Our client a leading oil and gas operator is looking for an accountant to join their team on a temporary 3 month contract until September.Position OverviewThe role is responsible for preparing accurate month end accounts in Gross GBP, preparing partner reporting and issuing billings for recovery of partner share of costs. The JV accountant will ensure costs are accounted for correctly and charged to JV partners in a timely and efficient manner and in accordance to the relevant JOAs. The JV Accountant acts as a key focal point for JV partners and is responsible for billings, resolving queries, partner budget approval etc. The JVA & Reporting Lead will also manage the reporting in Gross GBP costs to the COO and asset teams to provide an overview of the operational performance of the assets. Accountabilities * Key focal point for JV partners in resolving queries, partner budget approval etc * Attend Partner OCMs and TCMs as required, delivering Finance messages and responding to Finance questions * Responsible for issuing billings and resolving late payment queries * Support the Business Planning and Reforecast process through data collection, analysis and preparation of presentation material * Develop and foster close working relationship with the our clients, Tax, Treasury, Commercial and Business Planning teams * Assist Field Managers and their teams to deliver the annual Work plan and budget, annual partner budgets and quarterly re-forecast submissions. Highlight any issues from a financial perspective to Management prior to submission to UK Planning and partners * Provide input to COO monthly presentations for the Asset team on Production, Opex, Capex and Free Cash Flow plus performance against budget/plan and re-forecast * Month end reporting requirements Key Duties * Represent our client in Opcom meetings * Creation of Annual Work Plan and Budget, Reforecast, Life of Field Plan and annual partner budgets with input from cost control and optimisation team to reflect functional plans. Provide oversight, review and assurance during the preparation of the financial (opex and capex) and production * Prepare accurate month end accounts * Understanding the actuals compared to forecast/budget with reporting of variance analysis for key measures through PRS commentary * Prepare and issue Joint Venture monthly partner billings and ensuring timely receipt of cash call / invoice funds from partners. * Perform review and control procedures, ensuring appropriate and accurate operational shared cost allocations are aligned with JOA obligations * Monthly review and update of forecasts in SAP Analytics Cloud * Review and update of month end costs not managed within the cost optimisation team i.e studies, production operations, licence costs et. * Review and post journals to record tariff, transportation costs and any cost shares correctly * Assist with the Joint Venture external audit and work to resolve audit findings in a timely manner * Preparation of JV partner reports and facilitation of partner budget and AFE approvals * Representative at OCM meetings * Key reconciliations for area of responsibility including accrual reviews * Ensure compliance with our clients Capital Governance process and policies as prescribed in Joint Operating Agreements * Preparation of Finance slides for the Monthly COO pack * Preparation of Early Warning Report * PRT support for tax team * Update and submission of Indeva template for budget and reforecast purposes * Preparation of gross to net reconciliations Education Attainment & Accreditation * Qualified accountant or experienced accountant with oil and gas industry experience in a financial/commercial environment(SAP experience needed)Professional Skills & Experience * Experience in an oil and gas environment strongly preferred * Strong aptitude for numbers and analysis combined with strong excel skills * Strong PowerPoint and effective presentation skills Interpersonal Skills & Qualities * Commitment * Teamwork * Reliability * Positive Attitude * Initiative * Drive / Motivation * Ownership * Professionalism * Embraces Change and Continual Improvement * Actively demonstrates our clients core values of Leadership, Excellence, Accountability and Positivity I & D Statement We are an equal opportunity employer, aiming to recruit, retain and develop our people based on merit. Recognising the value of a diverse workforce, all applicants will receive equal treatment regardless of race, gender, nationality, age, sexual orientation, religion, disability, or any other characteristics protected by law.

Role DescriptionThis role will centre on the production of a full complied and reconciled Weights database.A key element of the role is the assessment of system Third Party Information (TPI) to identify structures, equipment and systems and check against the ShipWeight database.The Weights Engineer will be required to translate weights information into a purpose-made tool, which allows and configured against the project Master Equipment List.Regular reporting of progress against Weight Management Plan. ExperienceExperience of weight engineering processes (weight, centre of gravity, weight distribution, etc)Knowledge of ship structures, routed systems and/or outfit and arrangementAbility to understand and interpret Classification Society (Lloyd's Register) requirements in the context of cable selection and routing.Experience of assessing system and equipment data.Experience of interpretation and manipulation of large amounts of data. SkillsGood attention to detail with the ability to identify inconsistencies across complex datasets and design information.Ability to work independently and solve problems via liaison with other functions across the project.Strong interpersonal skills, adept at communicating at various levels across technical and commercial settings.Ability to clearly articulate progress and report key issues and risks to team management, and proactively work to minimise technical and schedule impacts.Good knowledge of Weights, AutoCAD and Rhino highly desirable.Basic knowledge of ShipWeight desirable.To apply for this position, you must be eligible to live and work in the UK and either possess or be able to obtain UK MOD Security Clearance to SC Level.Location can either be Rosyth or Devonport.